I recently interviewed Don Massenzio, author of Frankly Speaking – A Frank Rozzani Detective Novel and thought I’d share it with you here on my blog. 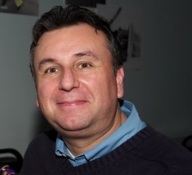 Don Massenzio was born in Syracuse, New York, to first generation Italian American parents. He is an avid reader. Some of his favorite authors include Harlan Coben, David Morrell, Stephen King, and Hugh Howey. His favorite book of all time is ‘To Kill a Mockingbird’.

Don began writing as a way to combat the long hours of travel and numerous hotel stays that are part of the ‘glamorous’ world of corporate travel. He uses writing as a therapeutic outlet. He recently took the jump to sharing his work with others.

His first published long work is the novel, Frankly Speaking. It is the first in what will hopefully be a series of books focused on the character, Frank Rozzani, a Florida private detective. The book is a throwback to the days of pulp detective novels with a tip of the hat to Jim Rockford from 70’s television and The Rockford Files.

Prior to finishing this book, his published work was comprised of short stories that will be merged into a collection in the near future.

He now resides in Jacksonville, Florida with his wife, children, and three dogs.

A 16 year old girl has disappeared. Her parents believe she has been taken and is being held against her will. Frank Rozzani, a transplant to Jacksonville, Florida from Syracuse, New York, must find the young girl despite the obstacles launched at him from the local police and others whose interests may be compromised by his investigation. Frank must enlist the help of his associate Clifford “Jonesy” Jones to find the girl, uncover the conspiracy, and stay alive. Frank must also deal with the demons that drove him from Upstate New York causing him to leave traumatic memories and his children behind

How long have you been writing? How long did it take to write your book? And what motivated you to write it?

I’ve been writing my entire life. It was only within the last year that I was motivated to share my writing with the public. I travel quite a bit for work and I began writing longhand in notebooks during travel time and late at night in my hotel as a way to wind down. It took me about 10 months to write and edit this first book. I let my wife and another close friend read it and they encouraged me to publish it.

This book is the first in a series. The characters have been well received and will be around for a few more books. The main character has a major conflict that needs to come to a climax and resolution at some point. That resolution may mark the end of the series.

What has been the most difficult part of your writing experience? Dealing with publishers, agents, editors getting reviews, query letters, what?

At first, I tried to go the traditional route through publishers using query letters. After a few rejections and many non-responses, I began to check out the self-publishing world and began reading about the journey of independent authors like Hugh Howey. This convinced me to take this step and self-publish. I have no regrets in taking this path.

Do any of your characters have secrets you can share with our readers?

My main character, Frank Rozzani, has a significant back story that was only hinted at in the first book. I originally had the entire back story there and my friend that edited my book convinced me to hold back some of that detail for future books. I’m glad I took that advice. Some of the story will emerge in the second book, but not all. Additionally, the characters of Fat Sam and Jonesy have back stories that will make for interesting reading in the future. Some of Fat Sam’s origins in New Orleans are revealed in the second book that is currently in progress.

If you were to be offered a movie deal, who would you like to see play the main characters? And why?

I realized after I wrote the book that Matt Passmore, who played Jim Longworth in the series The Glades, has the right attitude to play Frank Rozzani. The Jonesy character, if I’m dreaming, would fit Matthew McConaughey, and Fat Sam could be played by John Goodman.

Describe your writing process. Do you outline, create rough synopses, do you do detailed biographies of the characters before starting to write?

What didn’t you mention in the synopsis that you can reveal here?

There are many changes of direction that lead you down rabbit holes until you find out who the real villain is.

Describe where you do your writing.

Wherever I am. Having children, I’m good at blocking out environmental noise. I’ve written in my home office, airplanes, trains, airports, hotels, you name it.

If you had to do the experience of writing your work over, would you still write it? Would you change it? How?

I would not change anything. I only wish I had taken this step 20-25 years ago, although the environment for independent publishing did not exist then.

How did you choose the story you wrote?

This will sound stupid, but it chose me. The story has many influences, but there was no conscious choice.

How did you choose the title?

It is a play on the main character’s first name. I think that the other books in the series will employ this same technique. I am going to involve my readers in helping me to choose the next title.

Can you summarize your book in 140 characters or less (Tweet size)?

Frank Rozzani, a private detective, investigates the mysterious disappearance of a young girl in Northeast Florida.

Who were the authors that influenced you? What about them and their style appeals to you?

I have been influenced by many authors for different reasons. Stephen King is inspiring due to his ability to develop characters and scare the heck out of you through his writing. Mario Puzo inspired me at an early age through his ability to weave a crime story with a family epic. Other influences include Harlan Coben, J.K. Rowling, Dean Koontz, John D. MacDonald, David Morrell, Jonathan Kellerman, and Hugh Howey. I also am inspired by classic authors like Charles Dickens who was able to write for the common man and weave stories that still hold up today.

What did you learn that surprised you while writing your book? What was the most difficult part?

The most difficult part was deciding what parts to leave out. I was prone to being very descriptive and providing large portions of back story. I had to learn that sometimes less is more.

How much literary license do you take with your stories? Do you create fictional locations? Do you use real locations, with some fictionalizing or do you stick very close to the actual setting? Why?

I use real locations or locations based on places I’ve been. Many times the geography might be realistic, but the town or place of business might be fictional. In Frankly Speaking, I based some of the action in a bar/restaurant called The Sun Dog in Jacksonville. It has closed down, but I remembered the place and thought it would be an interesting location.

One thought on “Interview with Don Massenzio author of Frankly Speaking”